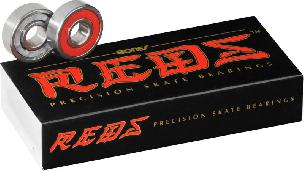 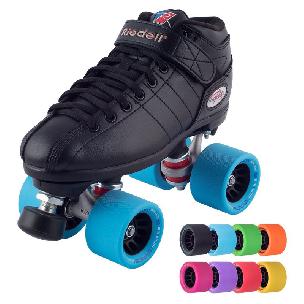 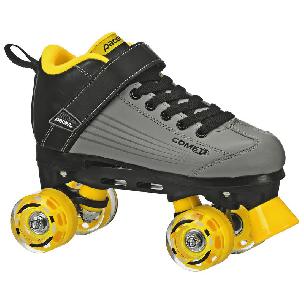 The French brand EOSKATES was created in 2005 by Frdric OSTROWSKY and Eric LE GALL, joined in 2010 by Daniel BUSSER.

EOSKATES 'goal was to develop a high quality and the lightest inline speed skate frame on the market using a raw material of Carbon.

In a few years, the EO Carbon frames have won a world renown by winning the most important skate races at the foot of the best skater in the world.

The EOSKATES company has been working around the clock for the past 15 years keeping improving and developing new frames.

2020 will be the year for The EOSKATES company to introduce a new Aluminum frame as well as a full collection of Italian Made Speed skate boots.

Very soon EOSKATES will have a full range of Skate packages, and this is only the beginning. 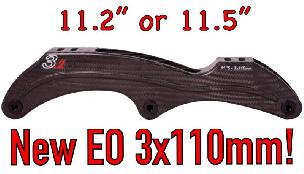 EO Aluminum Speed Skate Frame 3 and 4 Wheels set up
Our Price: $129.00
EO Aluminum 3 & 4 Wheels Skate Frame set up.
Finally an EO Aluminum frame after
15 years developing frames EO got there
own Aluminum speed frame
The EO is made of 7000 Series aluminum
double extrusion which make the frame
stronger and lighter than many other frame
on the market.
The New EO aluminum 3 & 4 wheels set up will be perfect
for young bigger who will be switching from 3 to 4 wheels . 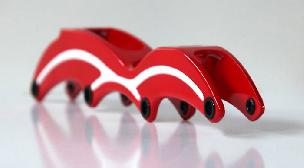 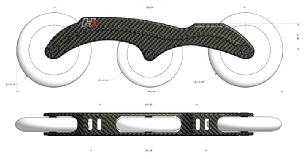 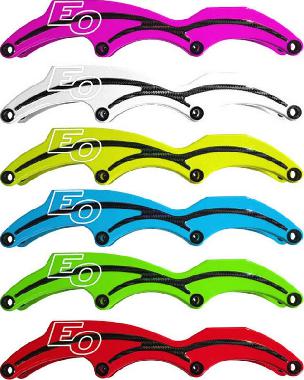 EO S2 Speed Skate Frame
Our Price: $339.00
EoskateS2 Speed Frame
The EO S2 Carbon frame is the
most versatile of the Eo family
The S2 frame will Still give you good
sepees with the 105mm wheels.and will
be a little easier for some skaters to push.
The Eo S2 frame come in
Size: 4x105 12.8"
Weight: 140g
Mounting: 195mm
(Spacer not included)

We discovered the EO Skate frames with the 4x104mm Diablo model in 2007. In 2008, the Sprint appeared on the market: the frame showed numerous improvements compared to the previous models.

At the time, the brand had already mapped out the main lines of its concept: a sandwich of carbon structure. The carbon models of EO Skates were the most accomplished on the market. Remember Hopiframe with their aluminum bridges and carbon sides, a heavier and less coherent concept, a less mastered technology. Carbon frames used to be known as fragile. Since then, this point has been improved a lot

Being truthful to its beginnings, EO Skates presents a model mixing black touches of carbon decorated with a modern white font highlighted with the number 2 in red.

Unlike the aluminum models, the sides of the H2 frame are solid and reinforced.

The back and front bridges leave a rather large contact zone which fits with most of the models on the market. There is a support piece at the center of the frame in order to rigidify the whole frame. The internal sides of the frame are perfectly smooth. The external sides have bulges for more solidity, which also distribute the forces between the different wheels.

The axle center distance is also standard with 195 mm.

The front bridge is 96mm high and the back bridge is 107mm, which is quite low on the whole. Balance is thus excellent.

The most interesting aspect of this frames measurements is its light weight! Only a bit more that 125g per frame, i.e. 75g less than an aluminum frame of equivalent measurements (~200g). You save 37.5% of the weight!

Yet it is not impossible that youll need a block to raise the frame up to the boot with specific molded boots.

You find this problem more often with the M2 frame (where the 2ndwheel might be rubbing a bit under the boot), than with the H2 (where only feet exceeding size 45 will be tickled by the 1stwheel).

We have been skating more than 1.000 km during 2 months with the H2 frames to make this test, during trainings as well as during races, alternating sequences on smooth and damaged roads, bikeways and tracks. We have also made a couple of solidity tests in urban settings, in order to get out of the strictly speed skating use of the frame. Program: jumping, brutal changes of direction, and even sliding!

Last but not least, we gave a pair of frames to Raphael Planelles from Villetelle, an all-rounded European champion, who likes equally sprints and marathons.

The H2s rigidity is satisfactory on the whole, despite the thinness of its sides and the absence of supplementary bridges to reinforce its structure. The back part is a bit more flexible than the front part, whereas the center part is really rigid. As a result, the frame works a lot with its ends, which makes it easy to use and prevents you from skidding in the bends.

Lets note the presence of only 2 oblongs, one in the front and one in the back. There are some side adjustment possibilities but no longitudinal ones, unless you have a boot with an insert along.

EO Skate frames are delivered with specific screws and bolts, the heads of which are particularly flat and flared in order to offer the biggest contact area as possible between the carbon and the screw. So that the whole is more coherent and reliable, and the pressure exerted while skating spreads on a bigger area.

EO Skates particularly cares about axles to minimize the sticking of new axles, guarantee a long-term tightening, and minimize the risks for axles to unscrew. Screws undergo the same treatment.

Carbon frames are not more fragile than aluminum frames, they only react differently to impacts: whereas aluminum is going to get out of shape, carbon fibers tear when the shock is too violent. The frame doesnt actually break but it cracks where the fibers are not intact anymore. It becomes very flexible. To break carbon for real you need an extremely violent shock which would break all the fibers up and down the frame.

In the end the result is the same: aluminum is out of shape and the frame is also unusable or not-precise.

Thus, lets forget about this idea saying that the EO Skate frames are going to break at the first little shock, we had fun jumping walkways, concrete cones, jumping gaps over 1m without any damage on the frames. With a normal speed skating use, whatever your level, these frames wont say a word of protest.

The first time you try the carbon frames, you have the feeling that you have no efficiency, no rolling. Indeed the diminishing of the weight on the front makes you believe that youve lost your mojo. After a couple of sessions, you realize that your speed didnt slow down in fact. On long distance races, this loss of weight is welcomed: you grow less tired.

You can feel the weight difference especially when you push, when you have to reach a high speed very quickly, as you need to spend less energy. Same comment as for uphill skating and sprints where you reach the aim faster.

On starts, the H2 give back the strength of the push very efficiently and are thus very reactive during impulsions.

We have also tested the 4x110mm: you win 7cm in height with the 3x110mm compared to the 4x110mm, so that the 3x110 is more aggressive, nervous and easier to use. It fits better to small skaters and tries less the ankles.

We have also concluded that you have less the feeling of being on a railroad track with the 3x110mm than with the 4x110mm: the legs are less tried and you dont have to push as much to keep your speed (for intermediary skaters, elites with long stride will like the 4x110mm sensations better).

Last thing to note: lots of people are afraid of the vibrations generated by rigid material like carbon but theres nothing like that with these frames, the sandwich design must have something to do with this. On the other side, we changed wheels during the test, and we realized that wheels have more influence on comfort than the frame in itself.

Carbon has invaded cycling, formula 1, aeronautics This material is already used for handmade shoes. There is no doubt that aluminum frames should be scared! EO Skates masters its technology and proposes a very accomplished product which proved itself during the last World Championships under the feet of Nicolas Pelloquin. As for us, we were seduced by the H2 because of their lightness, their easiness during the push and, despite everything, because of their comfort. Even if at first we were a bit skeptical about their solidity, we forgot this point to concentrate on their exceptional global performances. Congratulation to Eo!

Comments of EO Skates after reading the test:

Since this test, we have improved slightly the frame in order to reinforce the front and back parts which were too flexible. Thus, the weight of the frames is now around 135g. The whole is even more coherent and reactive.

"For the moment Ive only tested the 3x110mm. First impressions: its so light that its even confusing at first. You have the feeling that you cant push but according to the times I did after one month, its just a feeling due to the lack of practice with this frame, especially because Id been skating for a year with a very rigid frame.

I tested it for one week on the track of Geisingen (). I had the feeling that I could fly! And the times of the launched laps and of the 100m confirm it. I broke my records. The H2 is very reactive at the end of the push, it answers fast. Next step: testing the 4x110mm!"